This trip started at the airport and a casual visit with friends that included a ton of laying at the pool and a day at the salon. This may sound crazy, try to avoid judging me, let me share my story first…

These past three months, solo, in a city that is closed has been a wild ride. It is eerily  quiet, which I have used to my advantage by taking endless bike rides on empty streets, but for NYC it is just plain unusual. New York, hit the hardest by the virus, has been difficult to maneuver. For the most part New Yorkers left the city during this time making the city that never sleeps feel like it is taking a serious nap.

Then there is ME. I just moved to the city in December, so I had a couple months enjoying it all, from Broadway Shows to NBA Games, I was getting it in while loving the convenience of it all until March 12th. That was the day for me where I realized I was lucky too have just returned home from my trip to LA on March 11th, as I knew I would be still, as we all would for a while.

I went from making a list of tasks I never thought I would get through, like scanning in every document to back up on a hard drive, then to shred them all and achieve the dream of being paperless. Done. Then it was to go through everything I moved in, including my underground storage to see what else maybe I didn’t need. This is when I scored and found the emergency box of gym equipment I had packed from LA – steps, weights, bands, etc. So that was a win. I went through it all and then decided with how elastic time really was becoming I had to think bigger.

This is when I decided to order a sound mixer and see if I could tackle the task of recording the audio book version of my book The LIFE. This was not my standard I can get this done kinda task, this was grueling, this was exhausting and this was something that for three straight weeks I was able to focus on, distracting me from the silence in the world around me. It was during this process that I realized it had been three months since I had a hug. Human contact, shared a meal, spent time in person with anyone. So I decided that when I finished recording all of my chapters, I should take a trip back to LA and stay with friends and reconnect on an in person scenario. California has opened earlier than NYC so I also knew that just seeing people out would feel nice and while I was there, getting my hair colored and cut and a manicure, pedicure combo, sounded like heaven.

Friday morning, I was up and off to the airport. First, I have to show you my little spot. This outdoor seating area is where I like to sit for 15-20 minutes before I head into the airport. I have had some of my best power conversations with myself here and a couple of weeks ago I had mentioned to a friend I wanted to get in an uber and just go there to sit outside, as crazy as that thought is, she reminded me that I am more than ready to fly and stillness can only go so far with me, so a short trip was a great idea. SO, I took this pic to show off my little spot.

Enter the airport with me. This is the moment when anyone would ask themself “am I nuts for taking this trip” NO one is here, no one is anywhere.  My walk to the gate looked like this.

The entire gate area was only being used for one flight so everyone was able to social distance and everyone was patient and wearing a mask. When I got on the flight, I shortly realized all the seats were taken, as the flight was fully sold out. So, if this is something that you may be not comfortable with that you may want to wait to fly. I quickly realized that everyone traveling was also very concerned as everyone got to their seat and swiped everything down. Everyone was very careful about what they touched – and I should add that I wore gloves through the airport as I felt the trays at security and other shared items would just be better with gloves. I packed a dozen pair to cover me for my travel days, along with disposable masks so that I could always feel comfortable they were clean.

As I sat in my seat on the plane, I felt joy. I was even enthused to watch the safety video because the song is always in my head, another sign I missed traveling. I have not had a flight in a three month span for so many years of my life, I was relaxed when I was on that flight. As we landed in LA and I could visualize my friend arriving at the airport I teared up with excitement to see her and get to just be in her company. When she got out of the car and gave me a hug, I knew this risk of this trip was worth taking. We had big plans to sit at the pool, take walks, order take out from my favorite spots and spend an afternoon at the salon.

It was perfect and it WAS just what I needed. I understood all of the risks of travel, the virus numbers are rising in different places, but as much as I knew the entire situation, I still know me better. I know that I can only go so long without a little adventure, especially with my adventures always including a personal connections that I can share and enjoy.

Sunday night I headed back to LAX to take a red eye flight back to NYC. As you can see, the airport was empty, but again, the flight was full. 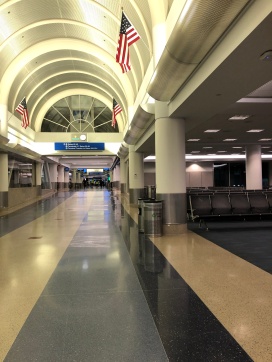 Now that I am back, even tanner than when I left, a fresh hair cut and coming off a weekend with friends that are really like family to me, it was exactly what I needed. I now plan to isolate for a couple of weeks, some bike rides and out door time, but I am not pushing the envelope here. I see this, for me, as a calculated process and I am willing to do everything with caution and an abundance of awareness.

I hope you can enjoy this without judgement, I hope that I was able to make you aware of what it is like to travel at this current time, but most important, that I traveled for love, connections, hugs and coffee with this little pup, Yogie!